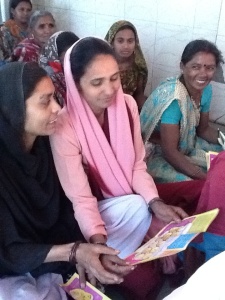 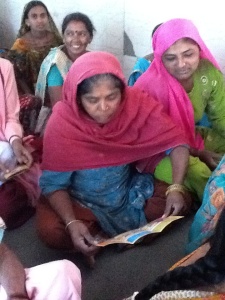 An hours drive from khambhat in the area of Bhaal where wheat grows. Bhaal area’s wheat is known the best for wheat flour. The drive to Khada was just fields of green land like tall grass. Passed many small villages with homes made of cow dung and mud and clay roofs. Lots of buffalo’s and cow’s roaming for hay in the fields. The village’s main income is selling milk. Milking the cows and bhuffalo’s and taking care of the heard is women’s main work in the village of Khada.

We got to the village by 10:30 and everyone was excited to see me at the PHC. The program was to take place at the Dairy which is at the center of the village where all the village activities take place. Women were gathered from 5 near by villages. A good number of 99 women had showed up even if it was their cooking time. I had the women a sing a religious song for me as we were still waiting for others to join us. I had a very enthusiastic group of women. As usual I do let the women know if anybody is beyond age 40 we will do a free mammography for them at the center as long as they let me know. After understanding the material I presented to them several women came up to me and signed up to get a mammogram done. Some of them stopped by to look and feel the breast dummy. Some will really understand the dummy some will laugh and feel its kind of strange. It’s something they have never seen so its very different and new to them.

Before I left the village I was offered a small bouquet of beautiful roses. The roses always reminded me of my grandmother’s flower shop in khambhat. In the night the flowers were wrapped up in a wet cloth so the heat did not wither them by morning!

This entry was posted in Uncategorized. Bookmark the permalink.